After 50 years, the history crossing comes back to reality

The transport of passengers by ferry between Porto Alegre and Guaíba began under the administration of José Loureiro da Silva (1937/1943), who created the service as part of a project dated September 18, 1940.

In 1958, around 600 vehicles and more than 1000 bus passengers crossed the Guaíba River every day on four ferries purchased from the United States. According to official records, these vessels were used by Americans during World War II.

The lack of suitable navigational equipment and typical Rio Grande do Sul weather conditions , with fog and strong winds, meant the service could only run during the day.

Meanwhile, in the early 1950s, construction began on bridges,  opened on December 28, 1958. As a result of the solid road network established between the two cities in the form of a highway,  and the growth of the automobile industry, the ferry crossing was deactivated in the early 1960s.

Population growth in the two cities over the decades and the corresponding rise in vehicle flow on the bridges demanded new alternatives.

As a result, 50 years later, the return of the water crossing emerged as a solution

A mode of transport that combines speed, safety, respect for the environment and passenger comfort.

All of this is brought to fruittion by CatSul  Southern Catamarans  a regional company that won the public procurement to provide alternative passenger transpor between Porto Alegre and Guaíba. Today, an average 70,000 people use the service every month.

Armazém B3 do Cais Mauá 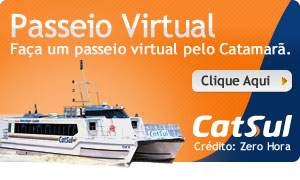